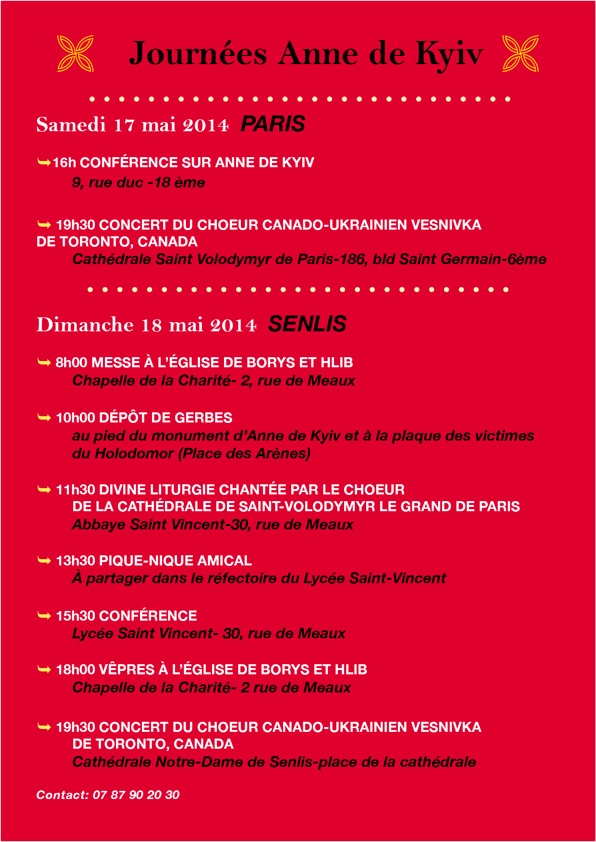 On May 17-18th in Paris and in the town of Senlis near Paris the traditional celebration of the Days of Anna Yaroslavna will take place.  The events are being organized jointly by the Eparchy of Saint    Volodymyr the Great of the Ukrainian Greek-Catholic Church and the Ukrainian community residing         in Paris. The celebration will be attended by the representatives of Ukrainian diaspora and the officials of the town of Senlis, invited members of the diplomatic corps as well as guests from Ukraine and North America. The celebrations will be held in the Cathedral of Saint Volodymyr the Great in Paris, in the newly-acquired Church of Borys and Hlib in Senlis and in St. Vincent’s Abbey, founded by Anna Yaroslavna.

The Eparch of Paris, Bishop Borys Gudziak, believes that the symbols of the celebration will allow   people to view from a perspective the integrity of the events in Ukraine. “This year’s celebration takes place at a complicated and significant time for all Ukrainians.  This joyful celebratory gathering in France will be for us a day of pride in our history and an experience of dwelling into our spiritual beginnings. After all, the fortitude and civic involvement of Anna of Kyiv may become for us both a standard and an encouragement.  The thousand year old perspective, emanating from the memory of Anna Yaroslavna and her grandfather St. Volodymyr, who is the patron saint of our eparchy, her uncles, the martyrs Borys and Hlib, is particularly relevant for us today,” noted Bishop Borys.

According to him, the conversion of Prince Volodymyr should become an example for current Ukrainian politicians.  “Volodymyr, who shed so much blood and had so many concubines, could at a mature age make the pivotal decision about conversion.  He radically transformed himself as a politician.  This is what our politics and our statesmen need – to admit the weakness of their lechery and to genuinely alter their lives in accordance with moral principles and selfless service,” emphasized Bishop Borys.

The French celebrations will not bypass events in Ukraine.  In the Church of Borys and Hlib, prayers will be said for the Heavenly Hundred and for all those, who gave their lives for freedom and dignity of Ukraine, beseeching God for strength and staunchness during times of great trials for Ukrainians.

Important is the work part of the celebrations, during which the community will present to all the guests the newly-created “Anna Yaroslavna Cultural Center”.  Guests will also be able to familiarize themselves with the new version of the architectural project for the renovation of the cathedral and the cultural center, created by Larysa Kurylas.

According to the co-founders Victoria Delinger and Anna Canter, “the goal of this Center is to be a platform of inter-cultural dialogue and to enhance cooperation among Ukraine, France, the European Union, and the international community.”

The center will develop cultural and educational programs focused on a better understanding of Ukraine in France, in Europe and in the whole world.  In particular, plans include exhibits, conferences, forums, festivals, concerts, educational programs and other cultural and public events.  After the restoration of the 17th century building, which is built on foundations which date to the Roman Empire, part of its space will house a permanent on-going exhibit devoted to Anna Yaroslavna.

15:30 –   Presentation of the New Project and the program of activities of the Anna Yaroslavna Center

Anna Yaroslavna is also known as Anna of Kyiv — the daughter of the great Kyiv Prince Yaroslav the Wise and the Swedish Princess Ingegerda, a relative of Saints Borys and Hlib.  In 1051, Anna in Rheims married the French King Henry I and became the Queen of France.

Anna spent a large portion of her life in Senlis.  At that time Senlis was the residency of French monarchs. In 1060 as an expression of gratitude for the birth of Philip, Queen Anna of Kyiv founded St. Vincent’s Abbey in Senlis.  The abbey has been preserved until today and right now houses a private Catholic college. At the entrance to the abbey stands the first monument to Anna Yaroslavna which was placed there after the French Revolution.   One more monument to Anna Yaroslavna was unveiled in 2005 by President Viktor Yushchenko.  In 2010, a school in Senlis was named after her.

Every year in May, the Ukrainian community in France together with the representatives of the French government, Ukraine and diaspora celebrate the Days of Anna Yaroslavna.

On September 27, 2013, the Paris Eparchy of Saint Volodymyr the Great of the Ukrainian Greek-Catholic Church bought the church in Senlis, a former church of a charity hospital, which had been empty since 2002.  The church was bought for 203,000 euro, donated by Lviv entrepreneurs as well as Ukrainians in Ukraine, France, England, United States, and Canada.

On November 16, 2013, in the newly acquired church which bears the name of Saint Martyrs Borys and Hlib, the first Pontifical Divine Liturgy, headed by the Eparch of the Eparchy of Saint Volodymyr the Great, Bishop Borys Gudziak, was celebrated.